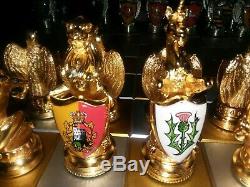 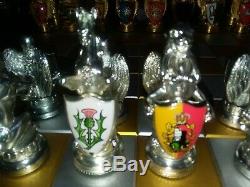 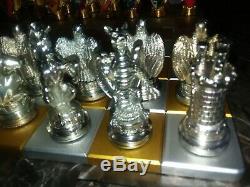 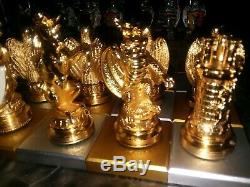 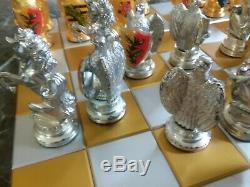 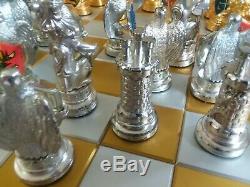 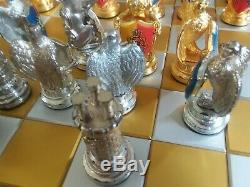 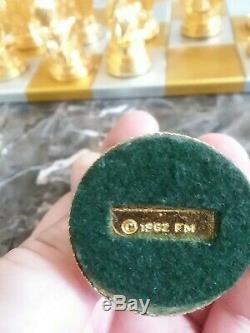 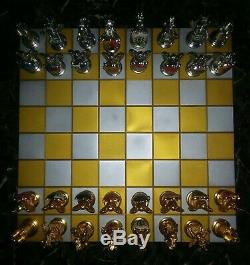 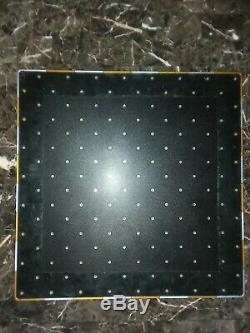 Designed by Robert Parsons, an official Herald Painter to the College of Arms, under the direction of John Brooke-Little, Norroy and Ulster King of Arms. The theme of the set is the historical kingdom of Britain England, Wales, Scotland and Ireland and the royal dynasties that have reigned over it for more than 1,000 years, from the early English kings to the ruling house of today, the Windsors. There are 32 pieces which range from 3 1/2 "- 4 3/4" tall and are perfectly crafted of 24K gold and sterling silver plated pewter with enameled pewter shields that are hand painted with the heraldic symbols of the houses of English royalty. The chess pieces are beautifully detailed on all sides...

Note the curled furl on the tail on back of the horses, their detail is fabulous ; from their expressions to their detailed manes and tails! The spectacular dragons, the regal lions and magnificent falcons are all crafted with equally impressive details.

The castles are detailed with a stag running past the entry and more... The solid pieces weigh 6-7oz each and they are incredible. Of the pieces are original pieces of art designed specifically for this set. The pieces are represented as follows: The King is the Lion of England, portrayed in the position known in heraldry as sejant. The fierce eyes, flowing mane and long-clawed feet convey to perfection the majesty and power of the king of beasts.

The forelegs support a shield decorated with an original design embodying the famous Round Tower of Windsor Castle, encircled with an oak leaf garland. The Queen, representing Scotland, is shown as the Unicorn (two Unicorns support the royal arms of Scotland). And here, the Unicorn holds a shield decorated with a heraldic thistle emblem, denoting the Stuart royal house.

The Knight, swift defender of Crown and Realm, is symbolized as a magnificent horse rearing up on its strong haunches. The Bishop is the traditional Dragon of Wales a fierce, proud creature, powerfully expressing the indomitable spirit of that nation. The Castle, or Rook, was inspired by the traditional crest of Ireland a castle together with a handsome stag with full antlers. Each pawn is crafted in the form of a falcon traditionally the hunting bird of kings in the Age of Chivalry. Each one has a base decorated with an identical arrowhead motif.

But on the shield borne by each pawn is a different heraldic design, representing a different ruling dynasty of Britain. Thus the shield of the Kings Pawn bears the crown insignia of Saxe-Coburg a rich green on a dramatic field of yellow and black stripes.

The Kings Bishop Pawn represents the House of Hanover and has a heraldic white horse courant on a red field. The shield of the Kings Knight Pawn bears the red rose of Lancaster. And on the Kings Rooks Pawn is a portcullis motif denoting the Tudors. The Queens Pawn carries two lions passant guardant representing the Normans.

The Queens Bishops Pawn shows the white rose of the House of York, set with a sun symbol. The Queens Knights Pawn bears a broom pod Planta Genista representing the Plantagenet dynasty.

And the Queens Rooks Pawn stands for the early English monarchs and carries the cross and martlets emblem. Metal board gold and silver 15 1/2" X 15 1/2" X 1/2" with 2" squares. Total weight of chessmen and board is over 20 lbs. Several chessmen have chips on the silver or gold coating and on colored shields.

I inherited a large chess set collection and most were used for display in glass curio cabinets or stored. All information given in the listing is described to the best of my ability either from paperwork my relative kept (was an accountant so he kept a lot of paperwork) or research I have done. I in no way want to misrepresent anything I list so should you feel something in the listing is inaccurate or misleading I kindly ask you to contact me so I can verify and/or make appropriate edits as I make no claims to be an expert. The item "ROYAL HOUSES OF BRITAIN HERALDIC CHESS SET 24K GOLD & SILVER 1982 FRANKLIN MINT" is in sale since Wednesday, July 29, 2020.