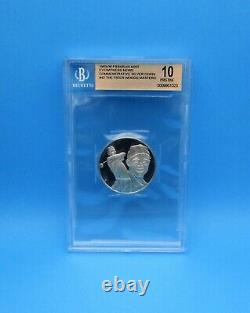 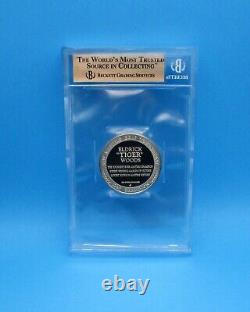 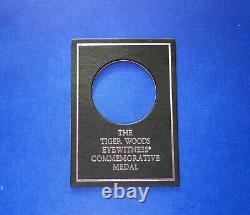 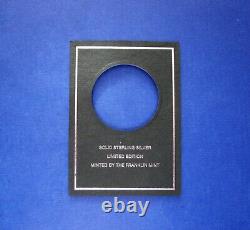 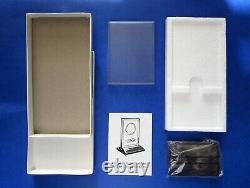 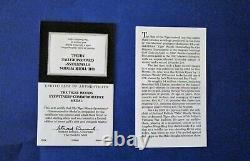 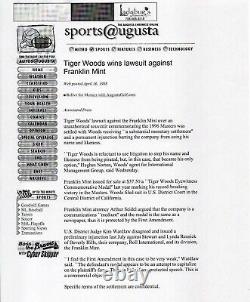 It was his first Major win and this beautiful limited edition uncirculated medal is now 25 years old. The Franklin Mint produced this medal as part of their "Eyewitness News" series that they ran from 1969 through 2000. When a rare worldwide historic news event occurred, the Mint would produce a limited edition medal to honor the accomplishment.

In all, there were 50 different historic events minted in the 31 years of the "Eyewitness News" program. Some of which are : The First Man on the Moon in 1969, Jackie Robinson's 50th Anniversary of the first ever MLB rookie of the year in 1997, President Reagan's Inaugural in 1981 and Pete Rose's record 4192th hit in 1985.

When Tiger won the 1997 Masters, the Mint decided to mint a medal to commemorate his historic achievement. Tiger's management team sued The Mint and won an undisclosed settlement as noted in the newspaper article shown in the photos. After extensive research, gathering and reviewing all documentation, BGS (Beckett Grading Services) contented to authenticate and grade the Franklin Mint Eyewitness News series coins/medals as a legitimate sports collectible. To date, they have graded 14 of the Tiger medals with only 8 being given the elite Pristine BGS 10 grade in 25 years in existence.

This medal was minted in. 925 solid sterling silver with a full mirror Proof finish. It weighs approximately 1 troy ounce and measures 1 1/2 inches in diameter or about the size of a US silver dollar. The front side of the medal has a close-up of Tiger and a second image of him at the finish of his golf swing. On the border of the back side it states, "61st Masters Golf Tournament 1997 Champion", with the inscription in the center, " Eldrick Tiger Woods" "The youngest ever Masters champion, widest winning margin of victory, lowest score in Masters history".

This medal comes with the original Certificate of Authenticity issued by the Franklin Mint with a facsimile signature of Stewart Resnick, Chairman of the Franklin Mint and a fact sheet summary of Tiger's journey to winning the first of his five green jackets. It also comes with the original box, clear plastic display case, and clear base display stand. Please view close-up photos, disregarding glare from protective.

Good luck and thank you for looking. This item is in the category "Sports Mem, Cards & Fan Shop\Sports Trading Cards\Trading Card Singles".

The seller is "jd120844" and is located in this country: US. This item can be shipped to United States.